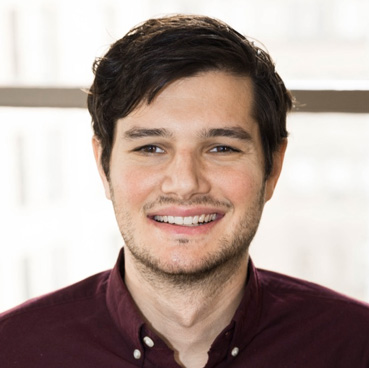 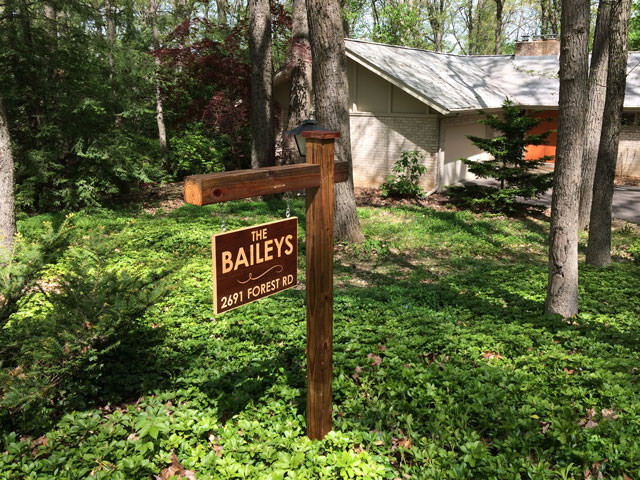 My sister and her husband recently bought their first house, and I decided to make them a wooden address sign to go in the front yard. My considerations were to keep the design simple while matching its intended rustic setting and be as legible as possible, including at night. With these concerns in mind, I decided on a double-sided wooden sign, with the lettering consisting of contrasting inlay. I was interested in getting more exposure with the Trotec laser cutter at NextFab, and this provided the perfect opportunity. The sign is constructed from black walnut and maple, with a plywood core. 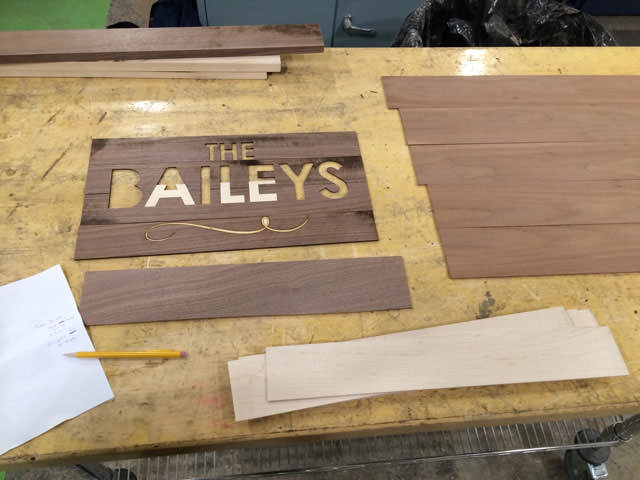 After completing some preliminary hand-drawn sketches, I created a vectorized version of the sign in Adobe Illustrator. This was sliced into multiple rows to account for the heights of the veneer slats I wanted to use. I resawed pieces of maple and walnut on the table saw, which limited my maximum slice height to around 3 inches. Pictured here are uncut maple and walnut veneer slats with a few pieces already cut. I spent a lot of time calibrating the laser on the excess ends of the pieces to find the highest cutting speed that still cut out the letters, to minimize the kerf of the laser. Another trick I learned was that reversing each design and flipping it over after cutting reduces the amount of visible kerf taken away by the laser, as the kerf is wider at the surface of the material. 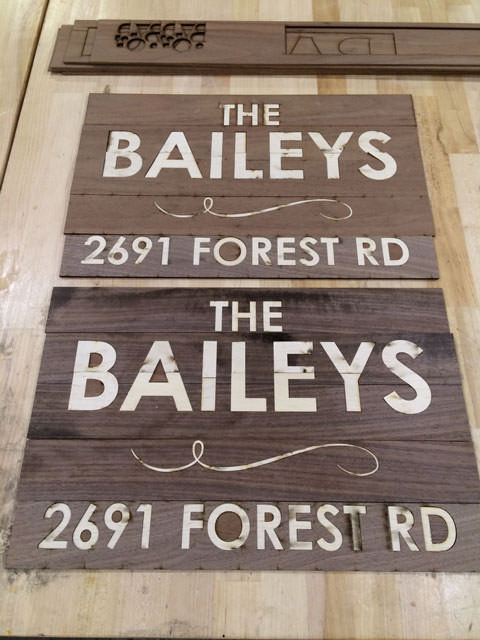 Laser cutting is complete for both sides of the sign and the pieces are laid out. I had to remember to cut the insides of the letters (B, A, O, R, D, and the flourish) out of walnut separately. (You can see some of those pieces on the end of the scrap slat sitting on top of the pile). 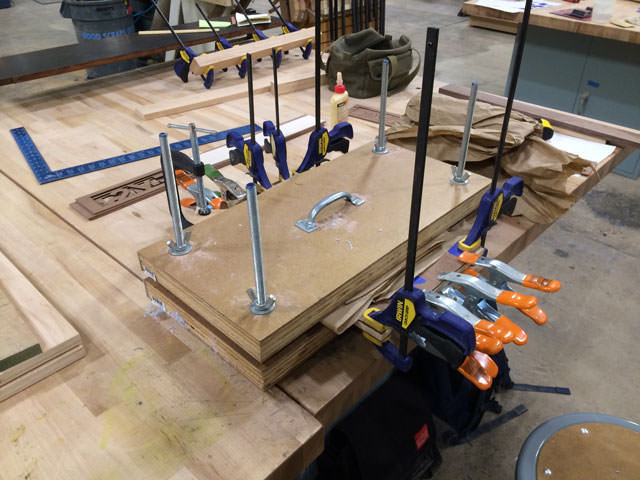 Here I am gluing the two faces of the sign to a plywood core cut to the same dimensions. I used painter’s tape to hold the sign halves together while gluing them down, and then clamped the whole thing up tightly. 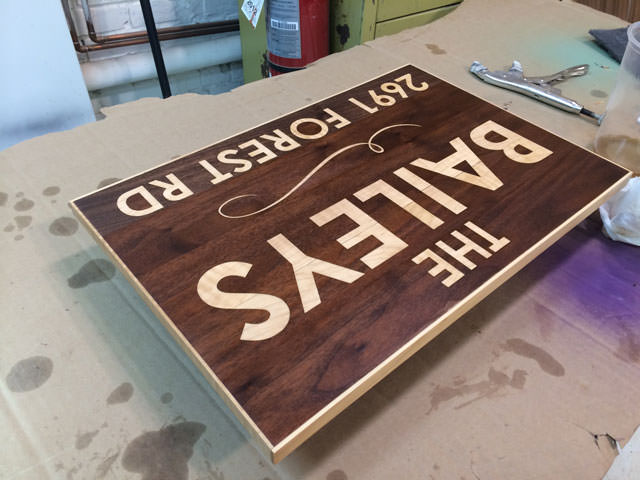 After removing the sign from the clamps, I sanded down the faces to get them smooth and even. I then attached thin strips of maple around the edges to cover the exposed plywood, sanded again, and finished it with Danish oil and a marine-grade exterior finish. 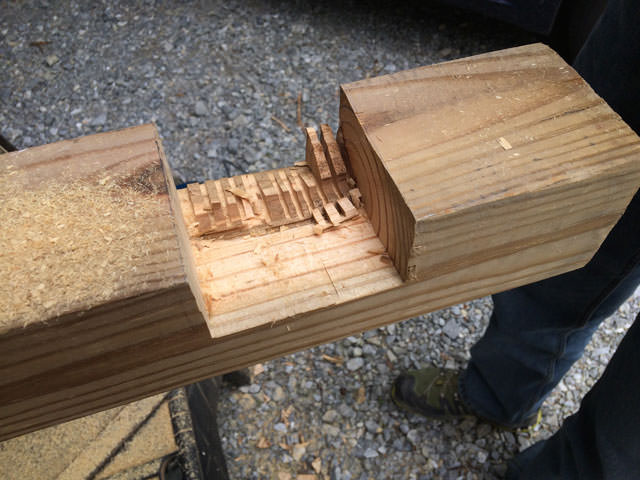 A few “bonus” pictures: I felt like my work was done when I finished the sign itself, but couldn’t find a reasonably priced signpost that I liked, so I decided that I may as well make one. My dad had a spare pressure treated 4x4 that he gave me. Here I’m preparing the first piece of a cross half lap joint. Most of the material is removed with a circular saw, and the remainder is chiseled out. 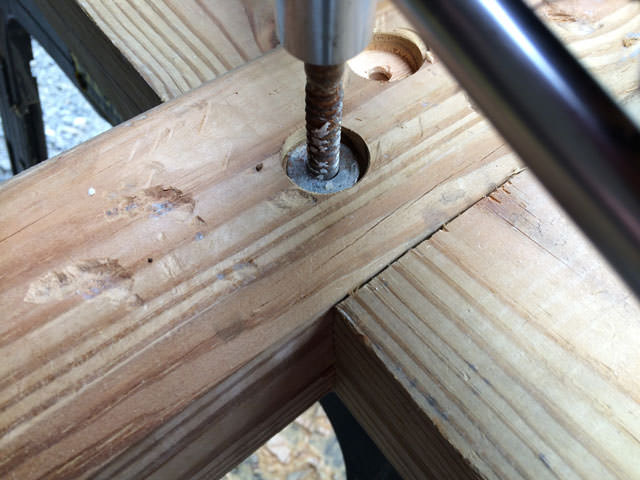 The cross piece was given the same treatment, and they fit together pretty snugly. In this photo, I’m ratcheting in the first of two countersunk bolts to fasten the pieces together. 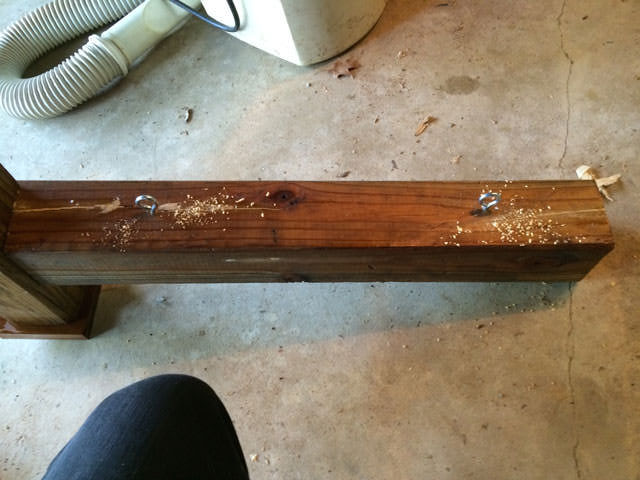 To attach the sign to the post, I added eye hooks to both the sign and the crossbar and joined them with chain. Here are the eye hooks on the bottom of the crossbar. I’ve also stained the wood with an exterior stain, as you can see by the change in color from the previous picture. 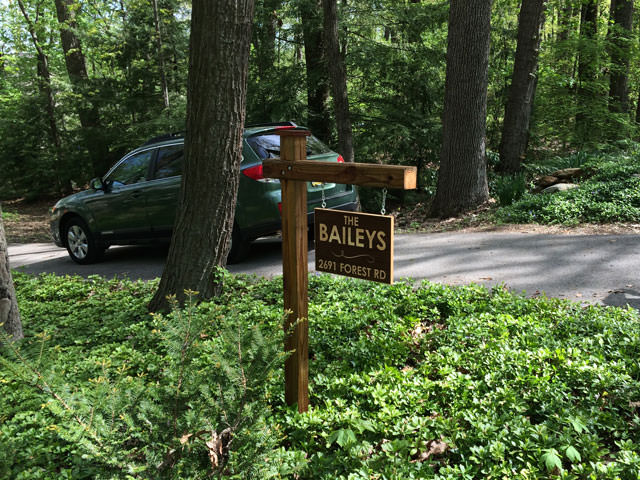 And I’m done! The sign is anchored to the ground with a post anchor from Home Depot, which has a two foot spike on one side and slot for the 4x4 on the other. I pounded the spike into the ground with a maul, placed the sign in the holder, and tightened the bolts on the anchoring side. Here’s the sign from one side…

…and the other! My sister and brother-in-law both approve of the final product, which is great, because it’s not worth anything to anyone else.